Hungry for the win

When you’re enjoying your well deserved coffee, post Saturday morning run, bike ride or paddle, spare a thought for the two South African teams who have been doing all of that non-stop since early Thursday morning. Currently representing us at the World Championships of Adventure Racing, Teams Merrell Adventure Addicts and Sanlam Painted Wolf are likely to finish only sometime on Monday. And that’s at the front end of the field. 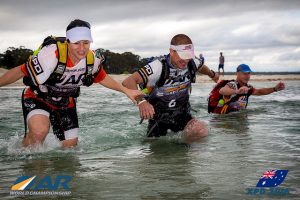 Merrell, with a strong paddling pedigree, led the 97 strong field in the first 35km sea leg on cumbersome sit on top kayaks, and they remain in the top 8 chasing down the seemingly invincible Seagate, reigning world champions.

Its been a relentless, very fast paced race so far, as teams navigate themselves around an unmarked 627km route from along the coast, through the caves and across the mountains of Australia’s Shoalhaven region.

Addicted supporters get to follow the dramas of wayward route choices online via a series of dots overlaid on the course map as each team carries a gps tracking device – which tells us where they are but is of no use to them. They carry the maps, a compass and a driving determination to get to the next checkpoint as quickly as possible.

Merrell suffered a setback when their resupply box was not delivered along with everybody else’s, and, as they are not allowed any outside assistance, were forced to continue on for a further 13 hours without their anticipated nutrition. After a full 30 hours of racing they managed to get a proper meal in before heading off on their bikes again. They are planning a 3 hour rest stop at their next stop.

Some teams will continue until exhaustion causes costly mistakes – falling asleep at the wheel, traversing the wrong mountain or forgetting to collect a checkpoint (which would lead to disqualification) but Merrell is known for their strategic planning and often gather strength and surge forward in the later stages of these expeditions.

So spare another thought as you go to bed on Saturday night, and Sunday night, because this team will still be going, making us so proud.

Get addicted on http://live.arworldseries.com/arwc16/
Merrell is Team 6 and Sanlam Painted Wolf is Team 13

Photographer Kirsten Oliver is in country, navigating her own way around the course to vantage points with a vehicle generously supplied by Ultimate Car Rentals and capturing some incredible images of the team and surrounds. See them all on the team Facebook: Merrell Adventure Addicts