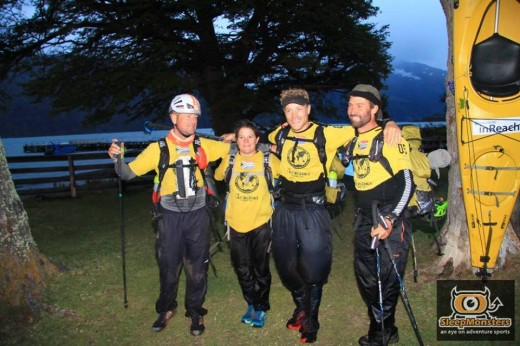 Merrell Adventure Addicts came hurtling in to claim third place at the Patagonian Expedition Race nine days after starting but “Not sure if you can call it a race, so much as something that altered your perception of adventure and survival.” Says team member Grant Ross. “When we got to the finish line, they just so happened to put the survivors into positions.”

It’s called The Last Wild Race and it truly is a journey like no other. 18 teams of 4 started off the 612km expedition on 16th February at the entrance to the Straits of Magellan in southern Chile and only 4 made it to the finish line after mountain biking across the continent in a persistent headwind, paddling in icy fjords and trekking through peat bogs and over glaciers under sleet and rain.

The South Africans impressed everyone with their fortitude through all the new experiences they had to endure, competing against teams from the far northern hemispheres who are more used to such conditions, and some of whom had competed many times in this race. Eventual winner GODZone from the UK remain unbeaten over six such events here.

The team had been most concerned about how they would handle the cold and afterwards admitted to “feeling it, but never suffering from it.” As Captain Graham ‘Tweet’ Bird put it; “We were actually never out of our comfort zone, and perhaps focused too much on looking after ourselves rather than racing.” Evidently some of the other teams were thinking differently and dropped out one by one through exhaustion or injury. Popular Japanese team East Wind were flying from the word go and the captain took a bad fall off his bike, leading to medical treatment and retiring from the race. Amazingly they returned, complete with neck brace, and pushed on to finish the race in second place after storming through the last 41km glacier run, dicing Merrell all the way.

Live coverage from the race was almost impossible, highlighting the remoteness of the region (and delicious wildness that so many of us seek) and so resulting in delayed and conflicting reports. Intermittent tracking, only provided in the second half, made for frustrating viewing as team dots popped on screen or disappeared completely. Due to terrible weather conditions deemed unsafe by the Chilean Navy, teams had been delayed from starting the kayak legs and their race times had been neutralised while stopped, camped out in thick, soggy wet forest overnight. Teams thus accrued time credit depending on how long they had had to wait. The teams were all kept up to date on their relative positions, but that information was not transmitted to viewers, so it was several hours after the finish that final ranking was understood.

Now that the media and teams are back in the town of Puerto Natales for the finishing ceremony, where everyone who even entered this race is honoured, more images and details are emerging. Merrell have posted their own photographs on their facebook page taken in the spectacular surroundings and will soon post one of their popular videos.

This race, more than others, had those watching trying to imagine themselves out there. It is such a foreign environment for South Africans.

“Fantastic.” Said Robyn Kime Owen of her fourth big adventure race in one year. “The Patagonian mountains, lakes, fjords and even the infamous weather did not disappoint. “ She didn’t get to see ‘a real iceberg’ on her wish list but “the peaks made up for it.” Towards the end of the race they travelled amidst snow capped mountains gazing at the iconic pointy bits of Torres del Paine and of this section, Hanno Smit said “Was such a treat, like the icing on a cake. It was spectacular and damn dangerous and without that section this race would have only been a fourth of what it was for us.”

For the rest, it was “Relentless, you get nothing for free. We were fighting the terrain all of the way.” Said Graham.

“I didn’t really know remoteness like I experienced here.” Added Grant. “This race is really wild! I’ve only known organized rope sections, and neutral zones where no racing can take place because it can be dangerous. Here, the danger lurks regularly on the route, and the organizers just can’t plan it, it is there already.”

A truly wild race and a truly magnificent team representing our country. Thank you to the organisers and all involved in setting out and managing this epic adventure. And heartfelt gratitude to our sponsors who let us live our dreams out there. Each and every product helped us get through and OUT.Perform ourselves. Our main sponsor Merrell, and also PVM Nutrition, Black Diamond, Ocean Eyewear, Llama Bars, ButtaNutt Spreads, Extreme Lights, SquirtLube and Giant Bicycles. Spot Africa stepped in and provided a personal tracker for the first half of the race.

Next up, Expedition Africa at home in May!

Look also to the official race media coverage and reports up on Sleepmonsters and the Patagonia page.