Merrell Marching on at World Champs 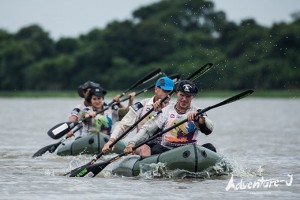 On Saturday at 13h00 Merrell set off well as expected at the start of the Adventure Racing World Championships. In this race with the paddling discipline dominating, by necessity, the 700km course in the wetland of the Pantanal, the team of four, including Graham Bird and Robyn Kime, has long been marked as the one to watch.

They soon got the tracker watchers awake and exclaiming though when they took a wrong turn on the river and lost a couple of hours, dropping position from second to twenty fifth in a field of thirty two teams.

It’s a race of at least five days though, and their supporters know better than to give up on a team that never gives up. At the Australian XPD earlier this year they were forced to rest for 8 hours recovering from near hypothermia on the banks of a river letting teams trickle past them, only to storm back and take second place just an hour and a bit behind the winners, with a grand finale of superb effort and skill.

On Sunday night they came off the third leg back in third position, behind NZ Seagate and UK Godzone. It had taken 15 hours to complete a packraft and trek stage that the organiser had predicted would take 7 hours.

Tales of tarantulas, toucans and alligators animated their stories. Another team reported seeing a jaguar eating a terrapin on the banks of the river. But the lament of everyone in so far is the irrepressible heat and humidity which saw three competitors put on a drip even before the race started. Merrell suffered so badly in the sweltering sun, one fainted on the trek, another had to lie down in the kayak for a few hours. They tied both vessels together, and between three of them they kept the team moving. This sport is nothing if not a beautiful, tangible description of the value of teamwork and helping one for the benefit of all.

They rested for three hours on the floor of a netted shelter – providing some protection from the plague of omnipresent mosquitoes – and set off again on a 68km trek over the mountains which form a natural border between Brazil and Bolivia. While the rest of the Pantanal is flat and wet, this section will have them traversing a ridge top for at least 15 hours, no doubt looking down on the area that will test their navigation skills, and patience, in the stages yet to come.

It’s not a fun race yet. Right now, and until at least Thursday, they are absorbing the incredible scenery and wildlife sightings, but mostly they are slogging it out, putting superhuman effort into an unbelievably difficult course.

The joy will be realised when the experiences have marinated. Watch the live tracking site on www.arwcpantanal.com to get involved in the action and drama without the drenching sweat and biting fire ants and support the Merrell team as they strive to Out.Perform the best endurance racers in the world.