Merrell Adventure Addicts off to peel a pineapple* in Brazil 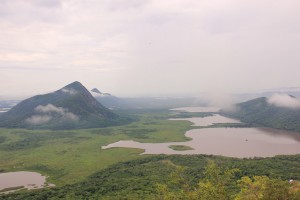 Prepping for the upcoming Adventure Racing World Champs in Brazil has involved a lot of admin. Not least figuring out how to get from one airport to another – in the same city! – in less than 6 hours. The team flies into the busiest airport in South America and, with bike boxes, backpacks, lifejackets and compulsory machete in tow, will then take another 2 hour flight, a bus trip and an overnight boat journey to reach the start line somewhere on the world’s largest tropical wetland. Or bog, as it is sometimes translated.

Start date is 14 November. Departure a full week before that. Regardless, getting to the Pantanal will be a whole lot easier than getting around it. The area is a mosaic of flooded grasslands, savannas and tropical forests extending roughly 200 000 square kilometres across central-western Brazil, Bolivia and Paraguay. “A huge soup plate that slowly fills up with water and overflows in the rainy season, gradually empties during the dry season and then starts to fill up all over again.” 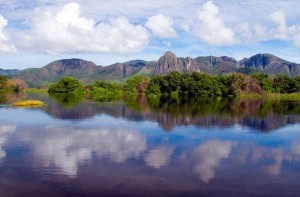 Guide books advise travel only in the dry. “Flooding, incessant rains and heat make travel difficult during the wet season.” No extra points for guessing what happens in November.

Along with the intensive hours of training they have put in to cycling, trekking and paddling, it’s intuitive navigational skills that are going to be the key to nailing this one. Brazilian land maps are notoriously outdated and not to be trusted and have often caused confusion and issues for non-Portuguese speaking foreigners using them in this type of race. With a dynamic landscape such as a wetland, which offers few landmarks in the largely flat terrain, finding channels and choosing the best route on the day is not an exact science. 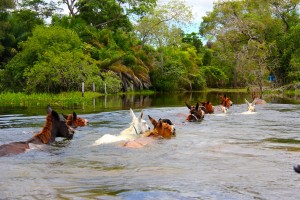 The Merrell team of Hanno Smit, Don Sims, Robyn Kime and captain Graham Bird are in top form, happy with their new listing at Number 7 in the world rankings and looking to lead from the front in this big race.

While none of them speak Portuguese, one of the best parts about travel is discovering local customs and adopting new phrases. Chances are the team will meet more wildlife than people out there along the 700km course, but they’re warming up a few “Tudo bem” greetings to swop for a Howzit and looking forward to shouting out “Boa pra caramba!!” – an exclamation of something being off-the-charts amazing – at random and exuberant intervals.

*In Brazilian slang one does not ‘deal with a complicated problem’, one rather “descascar o abacaxi” / ‘peels a pineapple.’